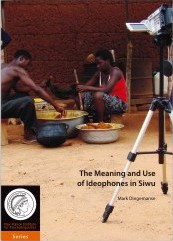 The Meaning and Use of Ideophones (2011)

This weekend, at the annual Taalgala ceremony in Utrecht, I was awarded the AVT/Anéla Dissertatieprijs 2012 for my dissertation The Meaning and Use of Ideophones in Siwu. For this prize, jointly presented by the Dutch Society for General Linguistics and the Dutch Association for Applied Linguistics, an independent jury selects the best dissertation in linguistics in The Netherlands in 2011.

Competition was fierce, and I feel greatly honoured that the jury unanimously choose my thesis on account of its “high scores in terms of methodology, crafsmanship, originality and clarity of reporting”. They also wrote of the thesis that it is “an exceptionally thorough piece of work, very well written and accessible to a degree rarely exhibited in dissertations in linguistics”. Whew!

More than just a recognition of my research efforts, I see this award as a sign of the growing significance of ideophone research. Only two decades ago it was possible to call ideophones “the lunatic fringe of language” (Frankis 1991) and to publish an article in Language declaring that “the number of pictorial, imitative or onomatopoetic nonderived words in any language is vanishingly small” (Newmeyer 1992). Only one decade ago, the editors of an important edited volume collecting cross-linguistic research on ideophones characterised them as “a step-child of modern linguistic science” (Voeltz & Kilian-Hatz 2001).

Today, cross-linguistic research into ideophones is thriving as more and more scientists realise the sheer ubiquity of ideophones in the world’s languages, and their significance to several major questions in the study of language and mind. What are the functions of sound-symbolism in language? How do languages encode perception? How do people deal with issues of evidence and experience in interaction? How pervasive is the principle of the arbitrariness of the sign? What clues might ideophones carry about the evolution of language? How do language ideologies impact our daily use of language, and even our linguistic theorising?

Old eurocentric stereotypes are giving way to fresh empirically grounded perspectives. Ideophones are fast becoming a respectable research topic for linguists, anthropologists, and cognitive scientists. I hope my thesis, along with other current work on ideophones, will serve the goal of providing scientists across disciplines with fruitful ways of thinking about depiction in language, and with robust methods to investigate ideophones and like words within and across languages.

More information about the award can be found in this MPI press release or on the  AVT web pages (in Dutch).