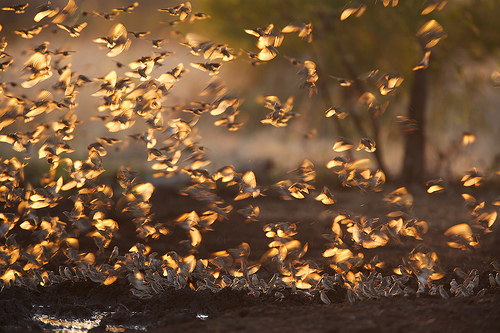 While I’m busy analysing conversational data from the last two fieldtrips, my plan is treat you to a few fine Siwu ideophones every once in a while: an ideophone proeverij.

Incidentally, the title of this mini-series testifies to a sad lexical gap in English: there seems to be no good equivalent for the Dutch ‘proeverij’, a noun derived from the verb proeven ‘to taste’1, blandly translatable as ‘tasting event’ but rich with layers of allusions to culinary delight and bon-vivantism. However, let’s not worry too much about the lexical poverty of English and go straight on to savour some Siwu sound symbolism.

of cutting in a sawing movement

Siwu ideophones display a weak iconic relationship between the form of the ideophone and the aspectual structure of the event evoked; in other words, they usually look like the events they depict. Reduplication for example evokes repetition, distribution, plurality, or a combination of these. In tsɔ̀kwɛtsɔ̀kwɛ above, reduplication is coupled with alternating vowel and tone patterns that bring into focus the irregularity of the sawing event. In contrast to this, non-reduplicated monosyllabic ideophones like ɣèèè depict sensory events as unsegmented or unitary.

The ideophone ɣèèè is interesting in this respect because it could also have focused on the pluractional sense of a swarming event — in which case you would expect a reduplicated form. This sense is out of focus however, as the gesture that regularly accompanies the ideophone also shows.2 It is in focus, I would argue, in an old friend of ours: Japanese uja uja, another ideophone depicting a swarming event.

2 thoughts on “Ideophone proeverij I”