Pragmatic Typology: New methods, concepts and findings in the comparative study of language use

Typology is the comparative study of linguistic systems. Just like one can develop typologies of sound systems, syntax, and semantics, so one can typologise pragmatics and conversational structure. This panel focuses on new methods and findings in the domain of pragmatic typology: the comparative study of systems of language use and the principles that shape them. We are especially interested in bringing together researchers working in various countries and cultural contexts who use a data-driven approach to the study of language in use.

Pragmatics has long had a comparative outlook, and some of its most prominent results have come from major cross-linguistic studies of politeness (Brown and Levinson 1978) and requests and apologies (Blum-Kulka, House, and Kasper 1989). Recent developments mark a renewed appreciation of the direct study of naturally occurring face to face interaction, resulting in an upsurge of studies that take a comparative perspective on pragmatics and conversational structures (Luke and Pavlidou 2002; Sidnell 2009; Enfield and Stivers 2007; Stivers et al. 2009; Dingemanse, Blythe, and Dirksmeyer 2014). Comparative work on pragmatics has grown to encompass different sources of data, combines a diverse set of methods, and has generated exciting new findings.

This panel brings together international experts in this emerging field to discuss recent work with a special focus on fundamental research questions and methods to address them. The growing availability of rich records of language in use enables us to answer old questions but also to pose new ones. Is there a common set of pragmatic principles that underlies social interaction across settings? How are systems of language use inflected by differences in prosody, lexical resources and grammatical systems? How do the exigencies of conversation shape and constrain the evolution of linguistic systems? Do practices of language usage form paradigms, and can such paradigms be compared across languages?

Papers in this panel present findings in the domain of pragmatic typology. Topics include requests, imperatives and repair; negative scope and word order; as well as field work and research methods. Languages include Japanese, German, Polish, Siwu, Japanese, Ungarinyin, Garrwa, and Italian among many others; several papers report results from large-scale comparative projects. The breadth of topics and languages covered shows that pragmatic typology stands to make substantial contributions to the task of making the science of language accountable to language use in all its aspects. 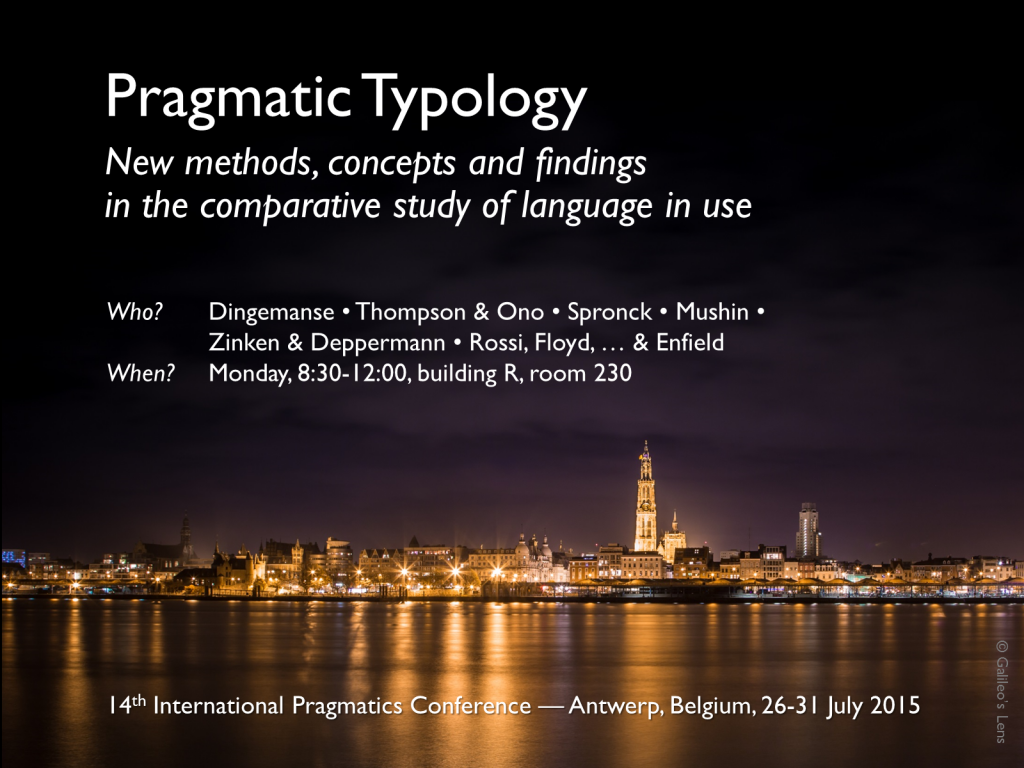