ELAN (lat-mpi.eu/tools/elan) is a widely used tool for the transcription, annotation, and analysis of audio and video data. This posting presents six simple tweaks of the ELAN interface that will be helpful to most ELAN users.

ELAN is said to have a very steep learning curve. While some of this may be inevitable in any complex application, part of it is simply due to the fact that its user interface logic feels positively alien on any operating system. Fortunately, some of this can be controlled in the preferences. Take a look at the options under Edit > Preferences.

☑ Deselecting the inline text edit box commits the changes
And so it should! Check this box if you are not a sado-masochist. What this means in normal language is that if you click somewhere outside an annotation you’re currently editing, you’re given the choice of throwing away your work (the default) or saving it (when the box is checked.).1
☑ Enter key commits changes in the inline edit box
And so it should! Check this box if you like working fast. The default key for what must be one of the most common actions in ELAN is Ctrl/Cmd+Enter, to the frustration and confusion of many users.2
☑ Clear selection after creating or editing an annotation
The persistence of selections in ELAN (in the form of blue highlighting) is mystifying to anyone who has worked with other timeline-based editing programs. This setting at least gives you one way to tune it down a bit. For the rest, you’ll have to remember the shortcut for clearing the selection (Alt+Shift+C at the time of writing).

By default, ELAN does not handle the user’s screen real estate in the most optimal way. If you observe people using ELAN in lab meetings, you’ll see them struggle to resize the screen to keep as much of the video in sight as possible while also showing some annotation tiers. Some of the problems include the fact that tiers are by default twice as high as they need to be, the stereo waveform display takes up more space than necessary, and the time-ruler is duplicated if you work with both audio and video.

Reduce tier height
By default, the text in your annotation is displayed only in the upper half of the tier. The lower half is unused. Right-click in the Annotation area and choose “Reduced tier height”. Poof! Suddenly you have almost twice as many tiers in view.
Display audio streams as blended and try vertical zoom
Right-click the waveform display and select Stereo Channels > Blended. This gives you a nice green/purple blended display of the audio channels. You can still see differences in the channels and it takes up less space.
For another audio-related tweak, check the Vertical zoom option in the same context menu. Set it at, say 300%, and see how much lower you can make the waveform display.
Get rid of the redundant time-ruler
Right-click in the annotation area and click to deselect the option “Time-ruler visible”. This gets rid of the duplicate time-ruler below the waveform. (The cause, if you want to know, is that time-rulers are created for audio and video streams. So if you have both, you’ll see two identical time-rulers unless you hide one. 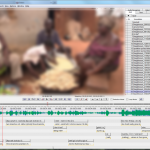 ELAN has a fairly good automatic backup system, but in many versions this is switched off by default. Go to File > Automatic backup and put it at a setting that works for you (I like 1 minute). You’ll have to do this anytime you install a new version of ELAN.

Why are these not default?

Some readers have asked me why these settings are not the defaults. The answer is complex and I don’t want to dwell on it too much. Suffice it to say that the origins of ELAN date back ten years, and for better or worse, it is very conservative interface-wise. It contains many features and settings that are holdovers from past versions, and due to the diverse user base and limited end-user testing, little is known about user experience and preferences in terms of interface logic or display settings. The consequence is that some of the more sensible settings are not the defaults, and that some of the options for customization tend to be little known. Hopefully this posting remedies some of these issues.

Note: Though I work at the institute where ELAN is developed, and have worked with the developers of ELAN to create a new transcription interface, I am not part of the development team. I’m just a user sharing his experiences. If you have other tips or observations, feel free to share them in the comments below. For ELAN support, check out the ELAN forums.

One thought on “Six sensible settings for ELAN”