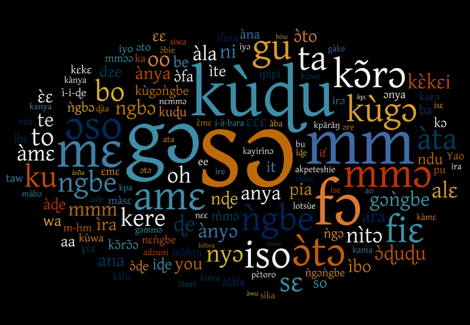 The Wordle above displays the most common words in some ten minutes of spontaneous conversation in Siwu, one of the fruits of my last fieldtrip. The conversation has four participants. Nothing groundbreaking about this particular Wordle, it’s just a nice word cloud starring:

Things this Wordle cannot show is the relative differences in conversational strategies of the participants. Mr. Orange, for example, as I call him in my ELAN transcript of the conversation, is by far the main supplier of mm and its cousin m-hm; in fact his repertoire is not much bigger than that — rather than doing the talking he prefers to have a supporting role in this particular conversation.

The three others are much more vocal and varied, not to mention much more expressive (ideophones are sprinkled all over the place!). But that’s all for another occassion. For now, cheers to the new Wordle!

2 thoughts on “Wordle now does Extended Latin and diacritics”