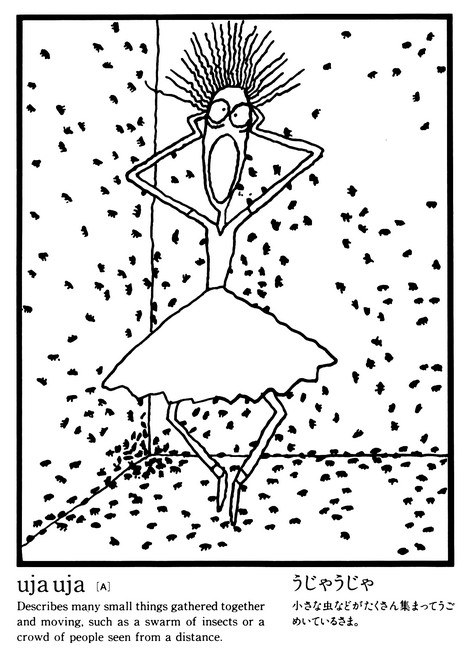 What better way to compensate for the overload of text in the previous posts than with some excellent illustrations of Japanese gitaigo? I have recently been looking at Taro Gomi’s delightful Illustrated Dictionary of Japanese Onomatopoeic Expressions, featuring cartoon-like depictions of almost 200 Japanese sound-symbolic words used to evoke certain sensations, feelings, and sensory perceptions. 1 The style of the illustrations calls to mind another favourite of mine, The Far Side. But whereas Larson has to create his weird world from scratch, Taro Gomi merely illustrates existing words from Japanese. Talk about the genius of language!

Given the special status of ideophonic vocabulary (the fact that it depicts rather than describes), it should come as no surprise that illustrations of such words work so well; better perhaps in fact than verbal definitions (see Samarin 1967 for some of the issues lexicographers face in the description of ideophones).2 In the preface to his dictionary, the author/illustrator voices some pretty clear opinions on this issue:

Moyamoya, dorodoro, gochagocha, barabara, fuwafuwa — no other words can describe these expressions. They represent a world of their own (…). Linguists, who are always described by such orthodox adjectives as kashikoi (wise), tadashii (right), erai (great), or rippana (respected), cannot handle them. If they handle them carelessly, they will run into problems.
(Gomi 1989:iii)

What can I say? One thing I’ll grant the illustrator immediately: he is indeed perfectly qualified to handle this subject matter. Here’s another example: 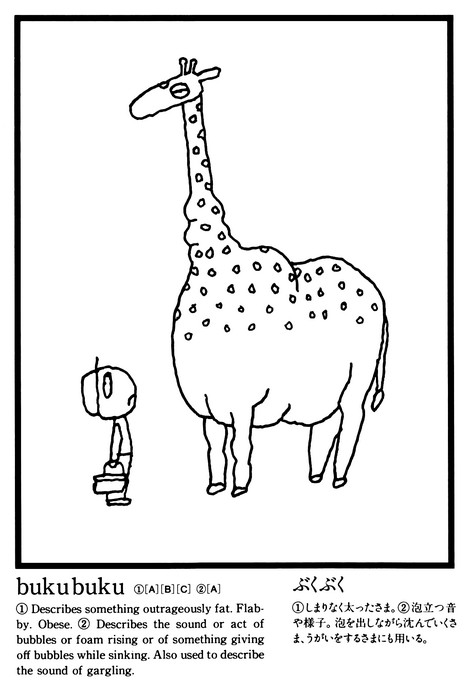 In Siwu, one would probably use the ideophone lùɖùù for this, or pumbuluu if it was a person’s stomach. Even though every ideophonic language has its own conventionalized inventory of expressive forms, there are cross-linguistic tendencies in sound-symbolism that amount to universals or near-universals. The use of voiced consonants and back vowels to evoke large and heavy things, as both Japanese and Siwu do in this case, may reflect one such universal. 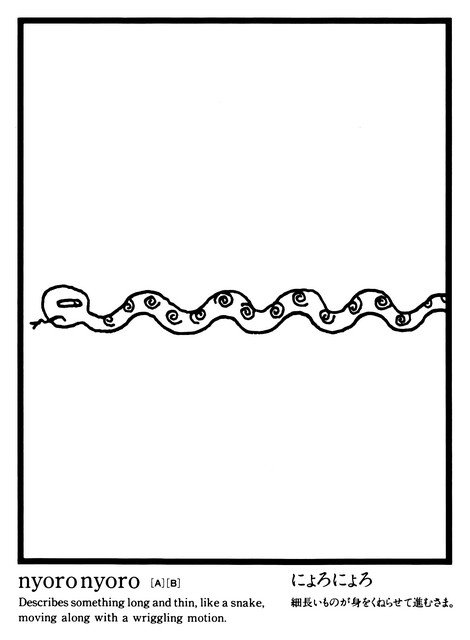 Although many of the ideophones illustrated by Gomi seem to be about inner feelings and emotions (cf. also Kita 1997:181), there are also words that evoke other types of sensations and sensory perceptions. Visual patterns, for example, as shown in the the illustration above. Interestingly, in Siwu, the corresponding ideophone is nyɛmrɛnyɛmrɛ.

I’m taking this dictionary with me on the next fieldtrip to Ghana — it’s going to be lots of fun!

13 thoughts on “Do you know this feeling?”