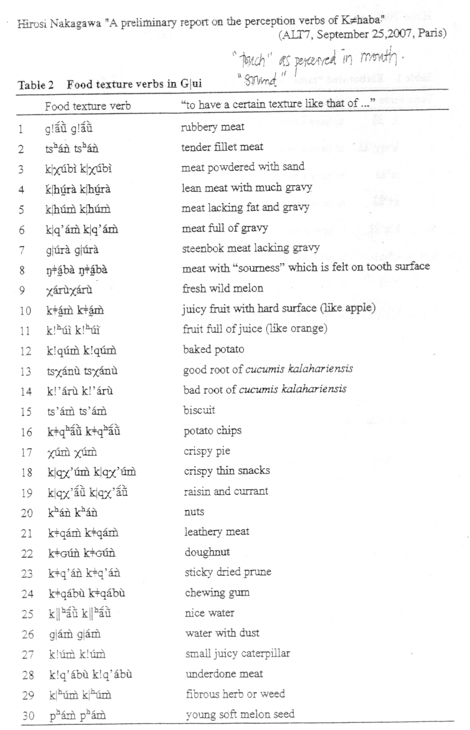 The food texture verbs above evoke an amazing number of different in-mouth perceptions. Their semantics is very detailed, including not just tactile information but also sound, and often an evaluative dimension too. It thus seems these words package information from different sensory modalities; in other words, they function to evoke a sensation as a whole rather than picking out aspects of it. A striking characteristic is furthermore the full reduplication, which presumably adds a sense of iterativity or distributedness to the event. We can also identify some sound-symbolic clusters (closely related forms mapping onto closely related meanings). Compare k!qúm̀ k!qúm̀ ‘texture of baked potatoes’, χúm̀ χúm̀ ‘texture of crispy pie’, and k|qχúm k|q̀χúm̀ ‘texture of crispy thin snacks’; or k!q’ábù k!q’ábù ‘underdone meat’ and kǂqábù kǂqábù ‘chewing gum’.

In the light of this data, it is worth thinking more carefully about what it might mean for a language to ‘have no ideophones’. Presumably, what the Khoisan-related claims mean is that there may be no unified, large class of expressive vocabulary like in Bantu.5 This might just be the case (though we don’t know for G|ui, and we have seen above that the claim is controversial). If it is so, it need not surprise us, for it is well known that languages differ in the extent to which they systematize and emphasize their expressive resources.

Indeed, how do languages go about systematizing their expressive resources? How does ideophony come about? What sort of societal features nurture ideophony, or inhibit it? I would argue that these issues are more urgent than the question whether or not a language can be said to have ideophones according to some essentially arbitrary measure. To really understand ideophony, we need to look at expressive vocabulary in all its guises. It has never been claimed that Berber languages are ideophonic, as far as I know — yet the expressive verbs of Tuareg share many properties with words that have been called ideophones in other African languages; and they help us to get a grip on the phenomenon of expressivity in language.

The food texture verbs of G|ui present a similar case. They demonstrate that the G|úi-kò, hunter-gatherers from the central Kalahari desert, care about making fine-grained distinctions in talking about in-mouth perceptions of food. This may be related not only to the sheer amount of different foods they eat — ‘people eat more than 80 species of plants and 40 species of animals’ (Tanaka 1996:16) — but also to the enormous significance of food in the harsh semi-desert environment of the G|úi-kò: ‘food resources are basically consumed the day they are acquired, in a hand-to-mouth kind of existence’ (ibid., 14).6 In a society where food is so intimately tied to existence, it is no wonder that people like to share the sensations related to eating it.

The G|úi-kò form a small-scale society living in close connection to the natural world. Tanaka notes that ‘[t]hey do not distinguish the animal world as cut off from their human world. It may be said that such an attitude is granted for the people who live enmeshed in the wilderness and are naturalists in the sense that they are an integral part of nature’ (ibid., 27). It has been noted by several authors (e.g. Westermann 1937; Nuckolls 2004) that such circumstances seem to favour the development of ideophony. Whether you call them ideophones or not, the food texture verbs of G|ui form another vital piece of the puzzle of expressivity in language.

N.B. This is the first post on The Ideophone with a ‘smart bibliography’ using COinS. If you use Zotero, the references above are just two clicks away from your library. Pretty cool, huh?