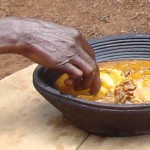 Transient Languages & Cultures published a nice post by Peter Austin last month on the question of how much time it takes to transcribe linguistic data. Working under tight time constraints during some recent fieldtrips, I found one way to speed the process up. It still takes an awful lot of time, but here goes.

In my experience, two very important bottlenecks in transcription, especially of conversational material, are (1) initial recognition (what exactly was said?), and (2) writing it down (how quickly can this be written down in the orthography you have chosen?). In my field situation (a Siwu-speaking village in eastern Ghana with few literate and even fewer computer-literate people), I don’t have someone (yet) who could do the actual transcribing, which is usually done directly in ELAN, so I am responsible for bottleneck #2 (getting it into the computer).

As regards the first bottleneck, for a native speaker it is much, much easier to ‘hear’ a fuller form of conversational speech than for a non-native speaker, so it makes sense to get that kind of help for bottleneck #1. Initially therefore, I would sit down with a consultant, play a conversation utterance by utterance (I would have done the segmentation in ELAN beforehand), and have the consultant repeat the speech while I wrote it down. For bottleneck #2 reasons this often meant replaying the same utterance multiple times. I soon realized that this was a waste of time for my consultant, who would patiently repeat two to four times what he already got right the very first time. Essentially I was using him as a tape recorder, rewinding and replaying his careful repetitions to make up for my deficiencies in short-term memory and typing speed! So here is what I did to speed up the process:

During my last fieldtrip, my main consultant had to study a lot for his final exams. The above modus operandi turned out to be a win-win situation. He provided me with carefully pronounced utterances (we would get so good at this that we nearly achieved real-time speeds), and I provided him with a place to study in my improvised office on a shadowy compound. So after an initial intense recording session, he would spend the afternoon learning while I would put my headphones on to do the first transcription, which was a breeze with his crystal-clear repetions (which included whistled tone patterns if needed!). Hours later, the final check would be a matter of minutes and we would be ready to enjoy our well-earned fufu in palmnut soup with goat meat — surely the best part of the whole transcription process!

4 thoughts on “Transcribing linguistic data: bottlenecks and one way to speed up”