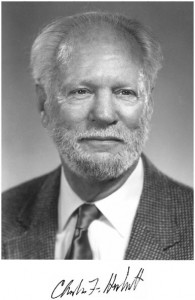 Charles Hockett had interesting views on the relation between iconicity and arbitrariness. Here is a key quote:

The difference of dimensionality means that signages1 can be iconic to an extent to which languages cannot; and they are, even though, as Frishberg (1975) tells us, the trend in Ameslan for over a century has been towards more and more conventionalization.

Now, while arbitrariness has its points (see, e.g., Hockett 1960a, p. 212), it also has drawbacks (Hewes, ANYAS, p. 495), so that it is perhaps more revealing to put the difference the other way around, as a limitation of spoken languages.

Indeed, the dimensionality of signing is that of life itself, and it would be stupid not to resort to picturing, pantomiming, or pointing whenever convenient. (Even when speaking we do this: for example, we utter a demonstrative such as there, which indicates relative distance but not direction, and supplement it by a pointing gesture that indicates direction but not distance.)

But when a representation of some fourdimensional hunk of life has to be compressed into the single dimension of speech, most iconicity is necessarily squeezed out. In one-dimensional projection, an elephant is indistinguishable from a woodshed. Speech perforce is largely arbitrary; if we speakers take pride in that, it is because in 50,000 years or so of talking we have learned to make a virtue of necessity (cf. Hill 1972, pp. 313-15).

Linearity means that single devices must serve multiple functions, whereupon structural ambiguity becomes par for the course (see C. R. Peters, Origins, pp. 83-102). We hear Carbon fourteen, Strontium ninety; out of context, we do not know whether this is mention of two radioactive isotopes, or a roadside marker giving the distance to two towns on the road ahead, or the final score in the game between Carbon Free Academy and Strontium Senior High.

It is such ambiguities, forced by limited dimensionality if by nothing else, that have given rise to the- notion of “surface versus deep structure,” which Stokoe evokes for the remark of which the present paragraph is an expanded paraphrase-his trenchant observation (ANYAS, p. 510) that in sign, as over against speech, “surface and depth more nearly coincide.” (pp. 264-5)

One thought on “Hockett on arbitrariness and iconicity”