So what do we have? First Plehn’s transcription. Rendered as mekoko lofomadisu, it’s a bad case of garbled transmission at multiple levels. Word boundaries and the contrast between open and close vowels didn’t make it; even the verb is lost in translation, leaving us with a simple apposition of ‘Die Henne, die Küchlein’ (‘the hen, the chicks’). Plehn does have quite an interesting interpretation of the song:

Fast forward a century. We’re still in Akpafu-Todzi, the mountain citadel of the Mawu people. Francis S. K. Agudze, the son of the then paramount chief (ìgara kpakpa) Oyete Akuamoah II, has access to the elaborate musical traditions connected to the worship of the deity Tokpaikɔ and decides to write on this topic for his diploma in Music at the University of Ghana. The thesis is essentially a description of Tokpaikɔ music, instruments, and texts. It is worthwile to quote Agudze’s motivation for his work:

Two categories of readers have been kept in mind in the writing of this thesis. Firstly, it is meant for citizens of Akpafu who should see it as a great relief to have a written document, on the religious music of their ancestors, which they can easily lay hands on for reference.

Agudze’s concern about prejudices against traditional religion links back to my previous discussion of the decline of funeral dirges in Kawu.

Apart from a wealth of very valuable ethnographic and ethnomusicological information, this thesis contains over 40 transcribed songs.2 And one of these happens to be the song of which Rudolph Plehn wrote down a fragment in the 1890s. How cool is that? Now we have not only the full version of the song (admittedly short though it is), but also its translation, a transcription of its melody, and background information on its ethnographic context: the worship of Tokpaikɔ.3 From the fact that it was the first song written down by Plehn, we may infer that it was relatively well known in the community at that time.

Below is Agudze’s flagstaff transcription of the song, followed by a glossed translation. 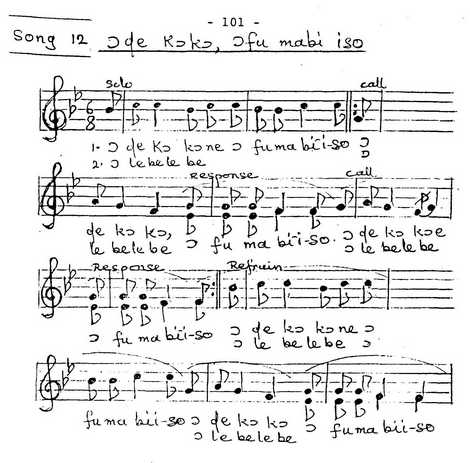 The first stanza consists of repetitions of this one line, which, as Plehn correctly noted, conveys the image of a hen providing shelter for its chicks.4 Plehn applies the image to the Mawu people themselves (it is not clear on whose authority), but according to Agudze it actually refers to the deity Tokpaikɔ.

The second stanza, not recorded by Plehn, changes the first half of the line into ɔ-lɛbɛlɛbɛ, which Agudze translates as ‘He [sic] hovers’. Now lɛbɛlɛbɛ, a reduplicated monovocalic disyllable, is clearly an ideophone. And this song is not alone in featuring ideophones — 9 out of 37 songs (or a good 25%) in this collection5 prominently feature one or more ideophones. Is it surprising to find ideophones in traditional worship songs? Perhaps no more than it is to find them in funeral dirges or greeting routines. (Check out my paper “Ideophones in unexpected places” to learn more about this.)

Refinding something that was never lost

On reflection, one may wonder what’s so special about finding a piece of text written down by a German colonial in the 1890’s back in an obscure thesis a century later. Of course, it’s gratifying for me as a linguist and lover of early sources to connect the pieces of the puzzle and thereby place this ‘lost’ fragment back in its proper context. But that’s not the only reason I’m happy with the finding.

Here is the other reason. Significantly, this fragment has always been embedded in the continuity of Tokpaikɔ worship, which Agudze happened to have better access to than Plehn a hundred years before. So the two pieces of written text that I have connected here are mere decontextualized artefacts of a living and breathing cultural heritage, kept alive and well by generations of Siwu speakers.

In a time of severe language loss all over the world, that is not a given — especially seeing Plehn’s prediction, in the 1890’s, that it was only a matter of time before these ‘little islets of tribal languages’ would disappear. Yet as I have learned, on the whole, the Mawu turn out to have strong and positive attitudes to their language and culture. The really cool thing, then, is not so much the refinding of this mangled fragment recorded by Plehn. It’s that in some sense, this fragment was never actually lost.

5 thoughts on “Bingo! Refinding the oldest specimen of Siwu”