High time for a new issue of ‘Ideophones around the web’. First, the ultimately blend of ideophone and idiophone: Nick Cave’s sound suits. Then, in English pop culture, the non-identity of ideophones and onomatopoeia is finally registering, thanks to bling. And finally, some word tasting notes on squee from Sesquiotica. 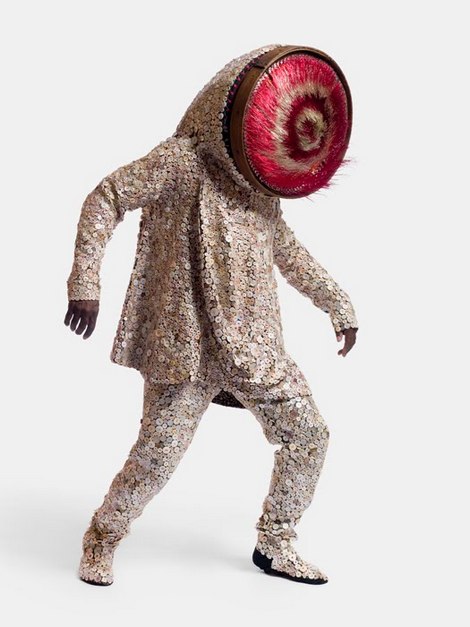 One of the many sound suits by Nick Cave

Fiber-textile artist Nick Cave (once a professional dancer) makes fullbody “sound suits” from mixed materials (metal, fabric, buttons, hair, etc.) that make all sorts of noises when they’re worn. They are the perfect blend of idiophone (self-sounding) and ideophone (idea-sounding) art. Art blog Beautiful/Decay features an interview with the artist. 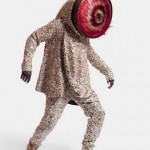 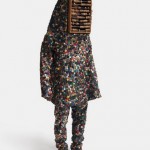 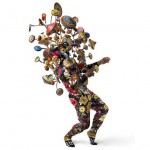 That rap makes for cutting-edge linguistic innovations isn’t news — but who would’ve thought it would help to tear down the single most common misconception about ideophones? And yet it does, through the word bling. The thing with bling is that its not imitative of sound (its meaning is essentially visual, referring to the dazzling reflection of light), but that people still feel that the form fits the meaning very well.1 So people seem to feel that it’s not onomatopoeic and look for a better term. Who was the first calling it an ideophone I don’t know, but the Wikipedia entry does, and it is trickling down into popular media like Rolling Stone magazine:

Lil Wayne applied such lyrical impressionism to the crew’s stock rims-and-grills material that he ended up coining a linguistic oddity known as an “ideophone”: a word meant to convey a visual effect through an imaginary sound. In this case, that of light bouncing — or “blinging,” if you will — off precious gems or metals.

Another recent coinage in pop culture is squee. James Harbeck’s Sesquiotica has a very nice post about squee in the series “word tasting notes”. Excerpt:

“Squee is a noise fangirls make,” Daryl said. “You know, anime fangirls, so excitable. It started out as onomatopoeia –” (“An ideophone,” Jess interjected) –”and has become a verb and a noun and probably an adjective too somewhere.” Ah, yes, the versatility of the English language — and of ideophones, which are words that have a performative aspect to them, like lickety-split, whoosh, and so on.

Actually, the whole of Sesquiotica is worth checking out — a place to go if you want to savour some words. I added it to the Ideophone blogroll. From the about page:

Words are delicious and intoxicating. They do much more than just denote; they have appearance, sound, a feel in the mouth, and words they sound like and travel with. All of these participate in the aesthetic experience of the word and can affect communication. So why not taste them like a fine wine?

Exactly. For some word tasting notes on Siwu ideophones, check out my Ideophone proeverij posts.

1 thought on “Ideophones around the web”