Words evolve not as blobs of ink on paper but in face to face interaction. The nature of language as fundamentally interactive and multimodal is shown by the study of ideophones, vivid sensory words that thrive in conversations around the world. The ways in which these “Lautbilder” enable precise communication about sensory knowledge has now for the first time been studied in detail. It turns out that we can paint with language, and that the onomatopoeia we sometimes classify as childish may be a subset of a much richer toolkit for depiction in speech, available to us all and in common use around the globe.

[Written by Mark Dingemanse as a contribution to the Max Planck Jahrbuch. A German version, translated by Gunter Senft, appeared here and in Scinexx Magazine.]

Few professions should be more familiar with the nature of words than academia. Words are the currency of our trade. They record our cumulative progress and they measure our productivity as we disperse our ideas through articles and books. How easy is it to fall in love with the printed word, black symbols on a white page, tidy spaces separating units of thought like stars dotting the skies of conceptual clarity!

How different are our everyday ways with words. We roll them on our tongues as we speak, whisper, or exclaim. They become pliable as we produce, perform, prolong them. We colour them with fine shades of meaning by means of tone and voicing. We masterfully integrate them with gestures and facial expressions into what linguists call composite utterances (Enfield 2009). For a long time all of these things were cordoned off as paralanguage: not the real thing, but a side show detracting us from the incisiveness of an idealised formal language. In the philosopher Frege’s musings on language, aesthetic delight and the striving for truth are in direct opposition.

However, this view is fast becoming outdated as linguists realise that the written word is a poor model for our true communicative competence. Language evolved in a much richer environment, and it has always done more for us than just deliver disembodied information. We use language to build social worlds, to relate to others, to share ways of seeing. We do not just inform, we also perform. This calls for a renewed study of how words work.

Often the best way to develop a fresh view is to radically change one’s starting point. Linguists at the Max Planck Institute for Psycholinguistics do this by collecting new data on languages far afield. In the Language & Cognition Department, researchers carry out sustained fieldwork in over twenty locations across the globe. Over the last few years, there have been several in-depth studies of a type of words known as ideophones. Characterised as “vocal images”, these words are probably the best approximations of painting in speech. They were long seen as exotic, out-of-the-way words, but new research shows that they are ubiquitous in conversations across the globe, and used in unforeseen ways.

Ideophones are words whose form is suggestive of their meaning. Familiar examples include English kerplop and boom or German holterdipolter and tick-tack. But whereas in European languages, these words seem small in number and limited mainly to imitating sound, many of the world’s languages have hundreds or even thousands of ideophones, covering a broad range of sensory meanings. Take tuŋjil-tuŋjil ‘bobbing, floating’, ulakpulak ‘unbalanced scary appearance’ and c’onc’on ‘woven tightly’ from Korean; or dhdŋɔh ‘appearance of nodding constantly’, praduk pradɛk ‘noises of scattered small drops of rain’ and grɛ:p ‘crispy sound’ from Semai, a language of peninsular Malaysia; or mukumuku ‘mumbling mouth movements’, fũɛ̃fũɛ̃ ‘elastic, flexible’ and kpɔtɔrɔ-kpɔtɔrɔ ‘walking like a tortoise’ from Siwu, a language of eastern Ghana (Dingemanse 2012). 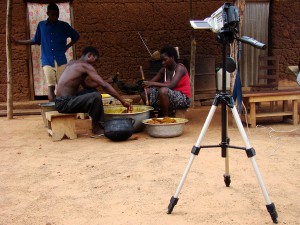 Linguists investigate the communicative uses of ideophones and gestures by making video-recordings of everyday social interaction — here, conversations during the making of palm-oil in Akpafu, Ghana. (Photo: Mark Dingemanse)

When studying video recordings of conversations in such languages, one sees that these words, with their peculiar forms and colourful meanings, are not spoken like ordinary words. They are delivered as performances. They bring to life the events in ways that ordinary words never do. Observing them in use, we get a sense of what the linguist and psychologist Karl Bühler meant when he wrote, “If there were to be a vote on who is more richly equipped with resources, the painter with colours or the painter with the voice, I would not hesitate to give the second my vote” (Bühler 1934).

How can we paint with speech? In the ideophone systems of the world’s languages, there are three basic ways in which speech is used to depict sensory imagery — three types of iconicity (Dingemanse 2012). The first is to imitate sound with sound, as in English boom ‘sound of explosion’. This is called direct iconicity. It is the most simple way, but also the most limited. After all, not all events involve sound.

What all events do have is internal temporal structure. This is where the second method comes in: the structure of words may resemble the structure of events. Bühler recognised this when he noted that words may be “Gestalt faithful” to the events they represent. Therefore we call this type Gestalt iconicity. For instance, words can be prolonged to evoke duration, closed syllables can evoke end points, and repeated syllables can evoke repetition — as in several of the examples given above. Finally, sometimes similar words are used for similar events. Take the three Semai words grɛ:p ‘of chewing fruit’, gra:p ‘of chewing crisps’, grɨ:p ‘of chewing cassava’. They share a common template gr_p which we can characterise as ‘crispy sound’ (Tufvesson 2011). Because related words map onto related meanings, we call this type relative iconicity. Together, these three ways of suggesting meaning are part of the word painter’s toolkit. They allow depictive words like ideophones to form perceptual analogies of events.

But how does one know that some stretch of speech is intended as an ideophone —a vocal image— rather than an ordinary word? Comparative research shows that languages converge on remarkably similar ways to do this. Across languages, ideophones sound special because they exhibit certain liberties relative to other words. They have a wider range of possible syllable structures and word forms, and they are remarkably susceptible to playful word formation processes like reduplication and lengthening. In spoken utterances, they stand out because they show a great measure of syntactic independence and they tend to be delivered as an intonation unit of their own. Finally, in many languages, ideophones are introduced by quotative markers or “say” or “do” verbs, emphasizing their performative nature. All of these features work together to mark ideophones as depictions, much as the frame around a painting tells us to interpret it as a painting and not as the wallpaper.

Researchers of the Language & Cognition Department are studying ideophones in a number of fieldsites. They use specially designed stimulus materials to study how these words encode sensory perceptions (Majid and Levinson 2011). They make high quality video and audio recordings of everyday conversations to understand how people use these words in face to face interaction — the kind of setting in which language evolved and keeps evolving.

In the course of this research it has become clear that ideophones are far from the stylistic flourishes that people once took them to be. They are dedicated sensory words, on a par with industry-designed sensory vocabularies in terms of their structure and coverage of sensory spaces (Dingemanse and Majid 2012). They are used to communicate expert knowledge during joint work and to share and interpret experiences in storytelling. In languages with thousands of ideophones, they are seen as the ultimate sign of eloquence.

Every challenge represents an opportunity. Ideophones challenge us to innovate theory and methods, encouraging us to move away from a view of language limited by ideologies or traditions to a perspective informed by relevant real world data. In the end, it should come as no surprise that depiction may be just as important as description in linguistic life. Even our own findings are not communicated just in abstract words. We illustrate them with gestures and visualise them in figures and diagrams. There is truth, then, to the saying that an image says more than a thousand words. But what we may have overlooked was that our words have been peppered with images all along. 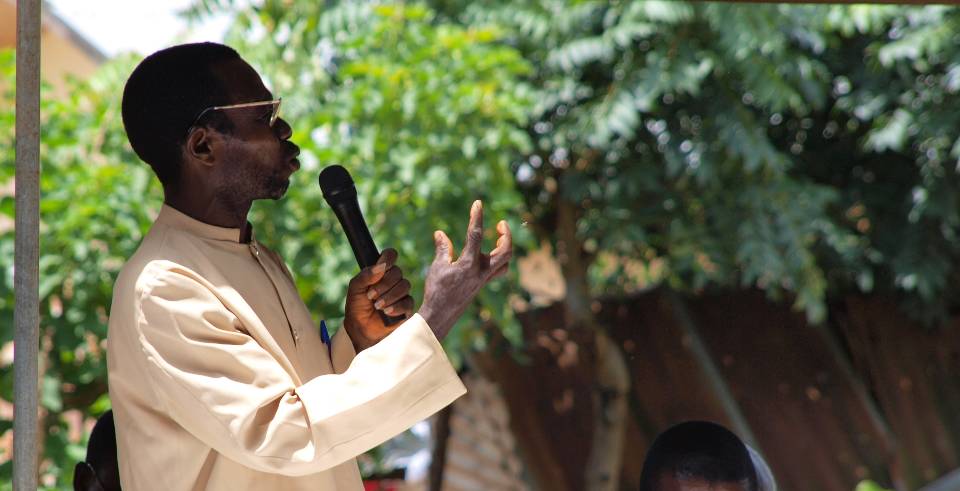