Guest posting by Gwilym Lockwood, PhD student in the Neurobiology of Language Department at the Max Planck Institute for Psycholinguistics.

Note: We have since published several papers showing that people can indeed guess and learn the meaning of ideophones at a level above chance: 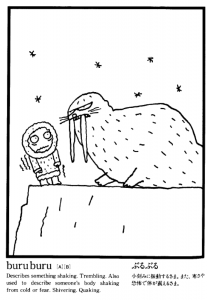 When you hear the word dog, you understand it because you have learned that meaningless individual sounds mean dog when arranged in a specific order into a word – it’s not like d means “fluffy”, o means “four legs”, and g means “enjoys rolling in smelly things”. The sound of the word dog is unrelated to the thing it means – it just so happens that the combination of d, o, and g in English mean dog. The same concept in other languages is expressed with very different sounds; hond in Dutch, inu in Japanese, sobaka in Russian. The idea that the individual sounds which make up words are unrelated to the meaning of the word that those sounds express is called arbitrariness in linguistics.

Arbitrariness seems to make sense; if the sounds of language did have specific meanings, if the sounds of words were related to the things they mean, then surely all languages would sound quite similar. Given that they rather obviously do not (for example, Hawaiian has only eight consonants, while Georgian has 28, and !Xóõ, spoken in Botswana, has at least 58), it is safe to say that there is little or no relation between sound and meaning.

However, researchers have recently started to investigate this assumption. Several languages around the world use sound symbolic words called ideophones, which are used to talk about sensory imagery. Interestingly, these words seem to be directly related to their meaning (i.e. the sounds of the words are symbolic of their meaning), and even more interestingly, there seems to be something universal about these words – several experiments have shown that people who don’t speak these languages can still understand (or accurately guess) the meanings of ideophones.

We can try that out now. See if you can guess the meanings of these Japanese ideophones (answers below):

Click here to see the answers to the quiz

Did you guess the meanings of these words better than you would expect? Unlike the word dog, it seems that the individual sounds in these words actually do contribute to the meaning of the words, and this is called sound symbolism. Sound symbolism is the opposite of arbitrariness, but the two can coexist perfectly happily within language.

Speakers of languages with sound symbolic ideophones, such as Japanese, often talk about how the ideophones create a very vivid image or feeling in their minds, whereas normal words don’t. When a Japanese person hears the word kirakira, meaning sparkly, it is like they can actually see the thing that is sparkly. How sound symbolism works, however, is not quite clear, and there have not yet been many neuroscience studies on it, but the research so far suggests that hearing sound symbolic words might involve other forms of sensory perception in a similar way to how people with synaesthesia associate colours to letters. My research at MPI is to investigate why certain sounds appear to be related to certain meanings across languages and how the brain processes these sounds.

6 thoughts on “Sound symbolism in language: Does nurunuru mean dry or slimy?”