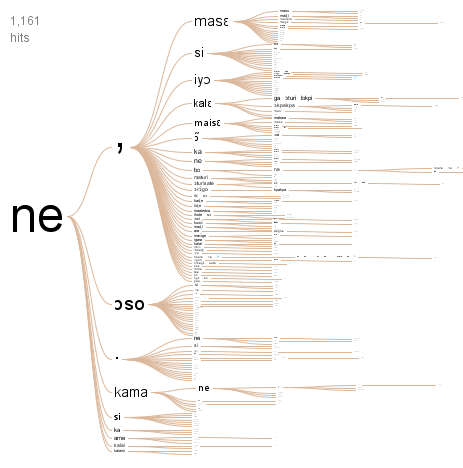 Brett was the first to bite the bullet, providing some statistics on the use of ne. He noted that “it occurs sentence initially 158 times (out of 1161) and sentence terminally 83 times. (…) It often seems to bracket a whole clause and it can even be doubled. The ne kama ne string is quite common.” Ray Girvan didn’t trust the visualization and inspected the raw text instead. He discovered that the text contains some dialogues “as well as as a complete song/poem with multiple uses of “ne” in a question”; that the construct Si …. ne occurs frequently in it; and that the text probably consisted of several different text types. On came Jason with a number of rather detailed observations:

Then there were a couple of anonymous comments on the visualizations themselves, perhaps from the above gentlemen, perhaps from others. One contrasted the left and the right periphery of ne, noting that the first1 was “very very branchy… indicating perhaps (a) sentence-final “ne” attaches to the preceding clause or sentence, rather than the preceding word or phrase; (b) all these words belong to some small number of open classes– they’re all nouns or adjectives, for example.” By comparison, this commenter noted, the visualization of sentence-initial “ne” is not nearly as branchy.2

So what does ne do?

So much for the frequency-based observations. Based on this, what can we say about the possible functions of ne? Brett’s guess was that “it has a grammatical function. Perhaps a negation (though I may be influenced by the spelling) or a question marker.” Ray didn’t place a bet and stuck to his observations. Jason said: “I’m guessing it performs some function that is not served by any English word. Maybe it indicates past tense. (…) For a while I was thinking preposition, but it seems really inconvenient for a language to prefer that prepositions appear at the extremes of sentences.”, and came back later to add “Maybe it’s a topic marker.”

Let me first disclose my own story before considering the above hypotheses. Ne is extremely common sentence- and clause-finally.3 In this context, its main function is to mark stuff as the topic on which a comment will follow.4 That is, it is a discourse particle used by speakers to signal ‘this was background information, more will come’. Because of this, it also functions as a floorholder, signalling that this was not yet the end of the interactional turn5 (even though the sentence may have been grammatically complete). Here is a glossed and translated example of clause-final ne:

The Si … ne construction noted by Ray also is a part of this picture. You didn’t know of course, but si means ‘if’, and therefore si … ne sentences are roughly equivalent to if-then clauses. Note however that Siwu ne does not correspond to ‘then’ but rather (I would say) to the rising intonation of the ‘if’ clause in English — it backgrounds the condition and announces the ‘then’ clause.

The anonymous commenter’s note that sentence-final ne is ‘very branchy’ nicely accords with this view of ne as a discourse marker. Basically, you can tack it on any type of sentence; there are no grammatical restrictions. This makes Jason’s preposition hypothesis less likely (prepositions usually occur in well-defined contexts). His other proposal that ne ‘performs some function not served by any English word’ is not without problems; we do have topicalizing and floor-holding devices in English of course (politicians cannot utter a sentence without them). On the other hand, one could argue that these devices (front-shifting, ‘uhm‘, intonation, etc.) are not nearly as wordlike as Siwu ne (as shown for example by the fact that the former do not show up as regularly in written texts as the latter).

So there we have function number one: ne as a topicalizing discourse particle. Jason’s last guess turns out to be spot on. 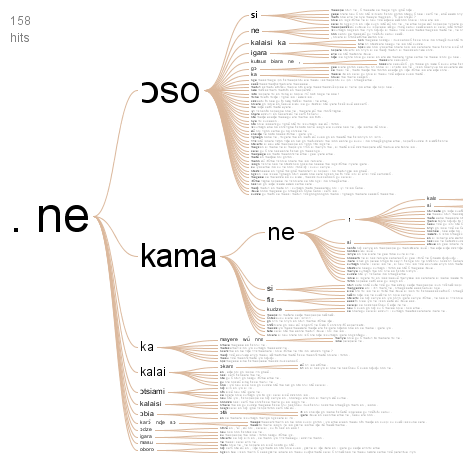 There is also a sizable number of sentences starting with ne (13,6% of all occurrences according to Jason’s statistics). About 60% of these are taken up by two collocations: ne ɔso (ne) and ne kama ne. The latter, first identified by Brett, is essentially a lexicalized construction combining clause-initial and clause-final ne, and it means something like “And after that, …”, kama meaning ‘back, behind’. The former, a combination of ne with ɔso ‘reason’ can be translated as “Therefore”. Thus, both constructions are rather similar to conjunctive adverbs in English, sometimes with a final ne added as a topicalizer announcing the comment that is to follow.

Overall, my feeling is that sentence-initial ne is very similar in function to sentence-initial and in English (for a good overview see Dorgeloh 2004). That is, it contributes to the overall textual cohesion by coordinating idea structures in discourse. It is also the most unmarked mode of connection in stories. Here is an interlinearized example of sentence-initial ne:

Ne sɔ lo-karɛ mi sɔ nda kaa se?
ne COMP I-ask you.pl COMP how home is
And he said, ‘I asked you, how is home?’

One remaining question of course is: what do sentence-initial and sentence-final ne have to do with each other, if anything? My first pass at an answer would be that both uses have to do with speaker continuation, or the ‘speaker-imposed structuring of ideas’, as Dorgeloh (2004:1763) calls it; but this is an issue that needs to be investigated more closely.6

Let me just end with a final note on the nature of the corpus. It consists of a lengthy text on traditional funeral rites in Kawu (Ray, this is the part that includes the poem, actually a funeral dirge); a long narrative about Tete Kalai, son of a smith; a personal narrative by a retired preacher; and some ten shorter stories from fast track literacy participants. All writers are adult native speakers of Siwu. The texts are set in the official orthography, which doesn’t mark tone.7 All in all, it seems that even this first corpus, though relatively small, is large and varied enough to bring out salient grammatical structures, just as I had hoped.

Thanks to the fellow language bloggers at Language Log for bringing the challenge to the attention of its readers; and above all, a big thank you to Brett, Ray, and Jason for your invaluable input! The Siwu for ‘thank you (pl)’ literally means ‘you are the ones who did the work’. Very true. Mìlobrara!

3 thoughts on “Many Eyes on Siwu ne”