It is little known that Doke did not actually coin this term, but just gave a new definitional twist to an already existing concept. One application of the term that was particularly current in Doke’s time was that by the psychologist-phoneticist Edward Wheeler Scripture (1864-1945). In his Elements of Experimental Phonetics, Scripture used the term ideogram for the holistic perception of a printed word. As he says, ‘printed words are perceived in wholes as ideograms and not as combinations (…) … words may be perceived under conditions that exclude any perception of the single elements.’ (Scripture 1902:128). Then he draws a parallel between the ‘image’ of the printed word and that of the auditory word:

It may be suggested that auditory words and phrases from ‘ideophones’ just as printed ones form ‘ideograms’. The further distinctions may be made of ideograms and ideophones into sensory (visual words and auditory words) and motor ones (written words and spoken words). In all probability the most prominent features of a phonetic unit are first perceived and the details are gradually filled in. (Scripture 1902:132)

Thus, for Scripture, an ideophone is a unit of sound that is perceived as a holistic whole rather than as a combination of some parts; and this holistic whole represents one idea. This is a very psycholinguistic notion, implying some theory of language processing and comprehension. 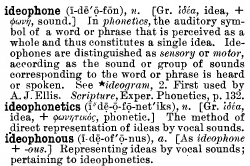 Scripture’s thoughts on this must have gained currency, for a few years later we find the term ‘ideophone’ included in the 1909 supplement to the famous Century Dictionary. In that definition (shown to the right), we can already identify the seeds of Doke’s usage of the term; and the two derived forms given are even more suitable: “ideophonetics, the method of direct representation of ideas by vocal sounds; ideophonous, representing ideas by vocal sounds…” (Cent. Dict., Suppl. p. 623).

Before going back to Doke, let’s dig a little deeper still. According to the OED, the term ideophone can be traced back to an 1881 work by philologist/ethnomusicologist Alexander J. Ellis. (Attentive readers will already have spotted the words “2. First used by A.J. Ellis” in the Century Dictionary lemma above.) Unfortunately, I haven’t been able to track down the citation provided by the OED, which runs thus: “1881 A. J. ELLIS Synops. Lect. Lond. Dialectical Soc. 2 Nov., Mimetics, ideographics, and ideophonetics. Fixed ideograph, variable ideophone, and their connection.” (Suggestions welcome.)

(Update. Thanks to the LH Truth Squad, we have the beginning of an answer: OED lexicographer Jesse Sheidlower tells us that The OED is citing a printed card announcing two of the London Dialectical Society’s November meetings, mailed by Ellis to James Murray (they were friends), and subsequently deposited by Murray in the OED archives. In the comments below, Jesse says furthermore: We’ll be clarifying our bibliography to show that this is not a published item. Hey, it does feel kind of nice to have some influence on the OED lemma for ‘ideophone’!)

Meanwhile, here is the relevant part of the definition as the OED currently has it:

This definition resonates very much with Scripture’s ideas, but strangely enough the wording is attributed to Ellis. For all we know, Ellis may well have made the same distinction as Scripture did some twenty years later, but it remains a bit puzzling that Scripture’s wording (“it may be suggested that”) seems to imply some claim of originality.3

But it’s not the representation of ideas!

Be it Scripture or Ellis via Scripture, the essential idea is clear: the representation of ideas through sound. Doke takes over this idea, adds the term ‘vivid’, and specifies the semantics a bit more; but all the while, Scripture’s definition is still at the core. Doke’s most important innovation thus lies not so much the term in itself, nor in its definition, but rather in his insistence on its status as a separate part of speech in Bantu languages. It has been noted before that Doke’s definition is not without problems; indeed Samarin, in his characteristic blend of wit and skepticism, grumbles about the ease with which linguists have been citing it uncritically.4

To me, the problem lies exactly in the residue of Scripture’s definition that is still present. “A representation of an idea in sound” — which word isn’t, one might ask? The term somehow fails to pick out precisely what is special about expressive vocabulary. Ideophones do not just represent; they evoke, they convey. What do they evoke or convey? Not so much ideas (an all too disembodied notion), but rather sensory perceptions, inner feelings, and sensations.5 How do ideophones do this? Often through sound-symbolic means, that is, through a close linkage of sound and meaning; another feature of expressive vocabulary that is only dimly present in Doke’s definition.6

Let’s close todays’ session with an example of an ideophone from Siwu, an undescribed Niger-Congo language of eastern Ghana. It may not be the most tasteful one, but I’m sure it will give you a good idea of what ideophones are about. The ideophone is sàsàsàsàsà, and in my database it is glossed as ‘spontaneous outcoming of urine’:

6 thoughts on “On the history of the term ‘ideophone’”