A research history of ideophones

Revised and published as:

This chapter surveys the varied theoretical approaches that have been brought to ideophones with a view to contextualizing the approach taken in the present study. Two main ways of making sense of ideophones emerge from this review of the literature. The first is to straitjacket them in Greco-Roman and by extension Standard Average European models of grammar, which has the effect of marginalizing and trivializing the phenomenon. The second is to stress their utter difference from all other linguistic devices, which sometimes leads to luminary observations but has the unfortunate side-effect of rendering them as an exotic phenomenon, insulated from ordinary language. This thesis takes the middle road: it sheds light on what makes ideophones stand out, but also analyses them in the context of the broader linguistic ecology in which they take their place.

Below is a facsimile of the first documented occurrence of the term ‘ideophone’ in English. It is a printed card dated 1881, announcing two of the London Dialectical Society’s November meetings, mailed by Ellis to James Murray (they were friends), and subsequently deposited by Murray in the OED archives. (Thanks to Jesse Sheidlower for making this available — the full story of how this document surfaced is found here.) 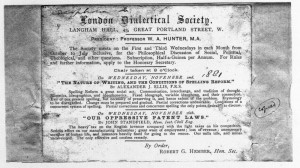 First documented occurrence of the term \’ideophone\’ in English.