Akpafu is a term used by the Ewe of Ghana to refer to the Mawu people, their language (Siwu), and their land (Kawu). The Mawu also use it for themselves when talking to outsiders. So far, I have heard two Mawu folk etymologies explaining the origin of this name. The interesting thing is that one is advanced by women and the other by men. Let me take note of them in that order:

Female version: At the market in Hohoe, Mawu women would point at something they want to buy (e.g. rice, maize, peppers), and say kpa fu mɛ̀, ‘gather and heap it for me’. The Ewe women soon came to characterize them by this utterance, calling those women Akpafutɔwo, or shortened, Akpafu. I have heard this version from two women independently last summer when I was in the field. 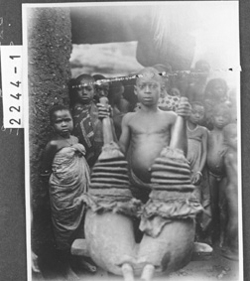 Male version: The Mawu are well-known for their ironwork. According to most men I spoke to, the name Akpafu is an onomatopoeic rendering in Ewe of the sound produced by working the bellows (Siwu ìɖe/a-): kpafu, kpafu, kpafu, kpafu. This version of the etymology has even appeared in print (Agawu 1988:77n4). I have heard it from at least five men independently.

Going to the market is of course very much women’s business, just like much of the work in the iron industry was carried out exclusively by men (Pole 1982). Though they are quite different in their sociolinguistic implications, the two versions do share some similarities. First of all, both versions agree that the term is an exonym introduced by the Ewe. The exonymic status of the term makes perfect sense, because names for peoples in Siwu always get the animate plural noun class prefix ma- (as in Mawu). Secondly, related to the first point, neither of the versions accounts explicitly for the initial a- prefix. This piece of morphology actually renders an Ewe origin more plausible, as this is a very common nominal prefix in Ewe.

I have seen men shaking the head when confronted with the obvious folly of the female version, and I have heard women ridiculing the notion that kpafu would be a good rendition of the sound of working the bellows. Which version is right? As so often in linguistic fieldwork, it depends on who you ask.

2 thoughts on “Gender-based folk etymologies for the name Akpafu”