For better or worse, APA is one of the most widely used citation styles in the cognitive sciences. One aspect of it that always bugs me is that it prescribes alphabetical sorting of in-text citations. I’m not talking about the bibliography; of course that should be alphabetical. I’m talking about the order of names when you cite multiple sources in one citation statement, as in “(Harris 1952; Chomsky 1957)” — or, as APA would have it, “(Chomsky 1957; Harris 1952)”.

My own strong preference is to have the order determined by priority and relevance. For instance, if I were writing about transformations in early generative syntax, I might want to cite both Chomsky and Harris, but I feel it would be useful to cite them in chronological order. Of course if I wanted to highlight Chomsky’s original contributions I could also do sth. like “(Chomsky 1957; and see Harris 1952 for a precursor)” — but the point is, in neither case would I want the ordering to be determined by a meaningless style prescription. The order of in-text citations is meaningful.

Now, if you’re using Zotero like me, you can already manually drag citations in any order you want. But still the APA default will hit you every now and then. Fortunately, this is really easy to fix in the CSL style, so I’m using a version of APA in which this is fixed. You can use my file, which is based on APA 7, currently the latest version.

I’m posting this for my future self as much as for others, so let me just note the utterly trivial single change you need to make in CSL terms. All you need to do is find the <citation> block and remove the <sort> statement inside it. That’s it. You can do this on your own system or in the online CSL code editor; or if you are more comfortable with the Visual Editor, you can also do it there. Save your adjusted style under a custom name to use it in Zotero.

Almost 13 years ago, in 2007, this blog started as a sub-site on my personal web page. It soon took over most of my online presence and I moved it to its own domain. Now that I blog much less regularly, and have moved institutions, it’s useful again to have a personal academic web page. So I made one: markdingemanse.net.

This is also fitting because I have, over the past decade, developed a line of research on social interaction that doesn’t really fit what I’ve mostly blogged about on The Ideophone (which is topics around iconicity, ideophones, perception, and the senses). I will probably always keep working on ideophones, and I may well keep blogging here on various topics; but it was high time to have a web presence separate from this that more fully represents my scholarship and science communication work.

I used to have a really useful page at the MPI for Psycholinguistics, but an institutional move to Radboud University and a site redesign make the publication list there a little harder to navigate than it used to be. The neat thing is that Zotero (with ZotPress) makes it really easy to display full publication lists on my new site, even organised by topic:

Give it a gander, a glimpse or a glance — markdingemanse.net! 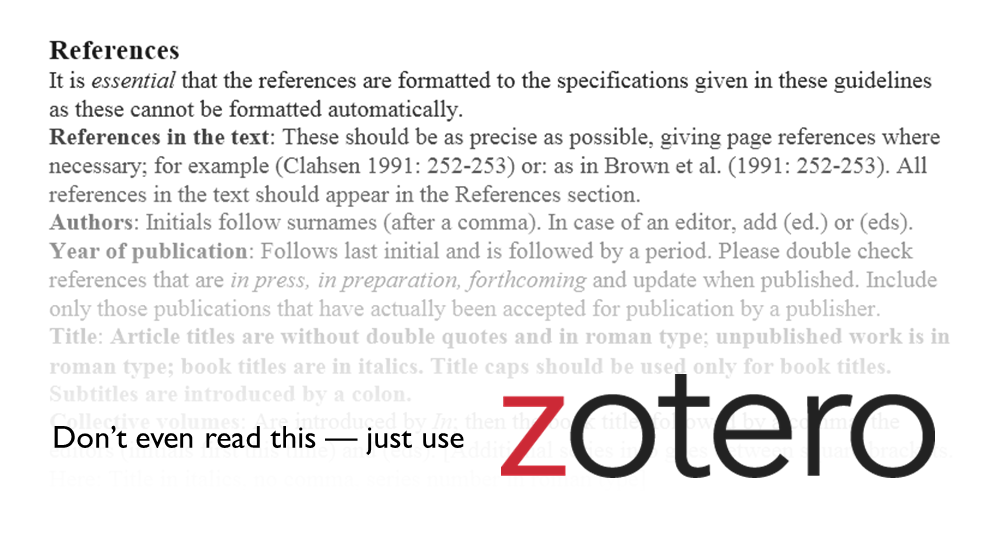 Linguists will know John Benjamins as one of the nicer academic publishing houses, not quite so terrible as Elsevier or other profiteering behemoths, and one with really good typography to boot. Iconicity afficionados will probably know the Iconicity in Language and Literature series published by Benjamins. One of my first articles on ideophones and iconicity appeared in this series and though since then much of my work has appeared in journals, I’ve just written a contribution for another volume in the series (this one edited by Kimi Akita and Prashant Pardeshi). I’ll share that paper on another occasion; here I just want to share a CSL style I created to make my life easier. If you’re just after the style, download it here (and see instructions for use here). If you want some background, feel free to keep reading.

END_OF_DOCUMENT_TOKEN_TO_BE_REPLACED

This tutorial introduces Zotero (www.zotero.org), an easy to use reference management tool made by scholars for scholars. The tutorial covers the basics of using Zotero for collecting, organizing, citing and sharing research. Zotero automates the tasks of managing bibliographic data, storing and renaming PDFs, and formatting references. It also integrates with widely used text processors, and can synchronize your library across devices. There is no more need to search through disorganized file folders full of inscrutably named PDF files, to copy and paste references across documents, or to manually deal with pointless differences in citation styles. Ultimately, the point of using a reference manager is to free more time for real research.

Duplicate detection is one of the things any serious reference manager should offer. Zotero users have been clamouring for it since the early days. There are basically two ways to implement it: as a preflight check, warning the user when they are about to add a potential duplicate; and as an after the fact scan, which enables users to weed duplicate items from their library.

The most recent version of Zotero takes the second route: a posthoc duplicate detection mechanism. Though definitely better than nothing, and with an elegant merging solution, the interface is still far from perfect and yields a lot of false positives, making it somewhat difficult to use. Besides, it is slow, because it tries to compare everything with everything, which amounts to a huge amount of operations even in moderately sized libraries. Although it is good to have at least something, what seems to me have been overlooked is that prevention is better than cure, and that a quick check before adding new items to the library would help users a lot.  END_OF_DOCUMENT_TOKEN_TO_BE_REPLACED

Here’s a quick tip for Zotero users who like to do their browsing in Chrome or Safari: you can install “Zotero Connectors” that will make Zotero recognize references in Chrome and Safari just like in Firefox. The Zotero developers are working on a standalone version, but these connectors can already talk to your Zotero library in Firefox. So if you, say, find yourself going to Chrome for its speed and nice interface, you can simply connect it with Zotero and use Firefox to host your local Zotero library until Zotero Standalone comes along. END_OF_DOCUMENT_TOKEN_TO_BE_REPLACED

I keep forgetting the kind of simple edits that are so trivial to make in CSL styles. Here I catalogue a few, for my own benefit and hopefully also useful to others. END_OF_DOCUMENT_TOKEN_TO_BE_REPLACED 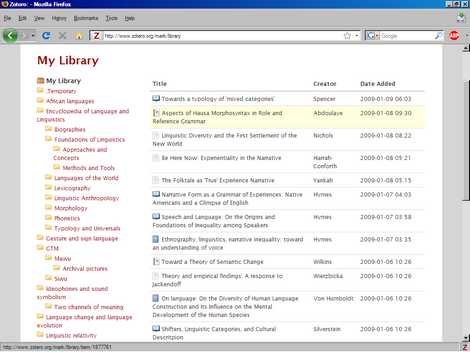