Making and breaking iconicity was the theme of a plenary lecture I gave at the 6th conference of the Scandinavian Association for Language and Cognition (SALC VI) in Lund. Here’s the opening slide: 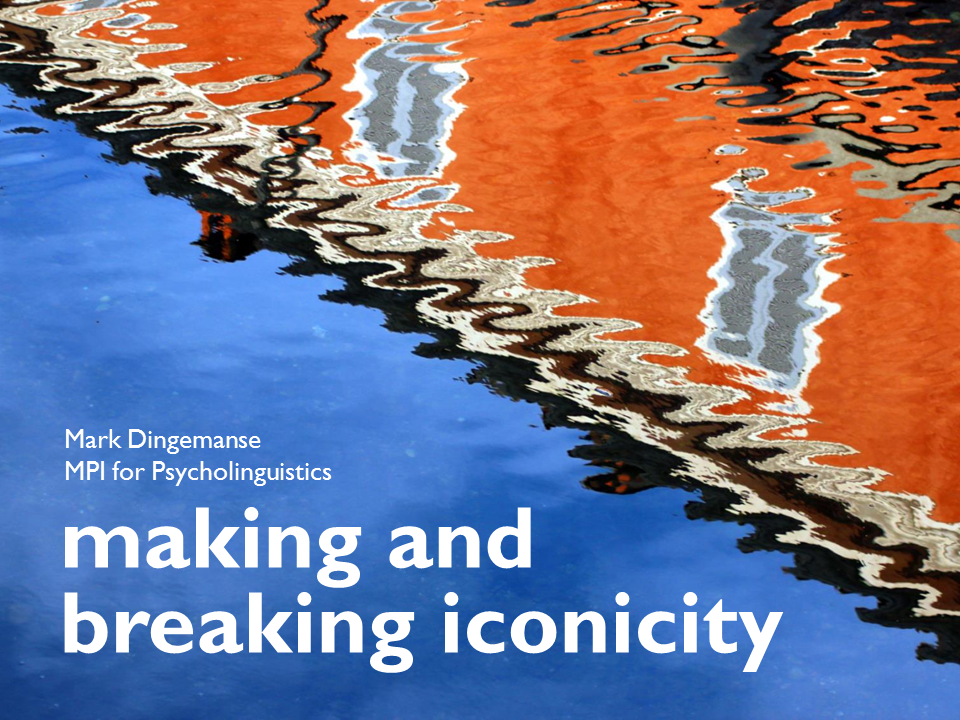 Research on iconicity and sound symbolism has long focused on how iconic associations are made — finding universal crossmodal associations using pseudowords like bouba and kiki, and trying to understand what makes ideophones (and aspects of sign language) iconic and how they may help learning. This is great, but to understand underlying processes, we also need to understand what happens when we break iconicity. When you break a system (carefully, in a controlled way), you can get a new view of its internals. We need more work on breaking iconicity. What makes it dissipate from the lexicon? Which cues do we need to remove to make ideophones harder to guess? What happens to learning if we mess with the link between form and meaning? Under which circumstances is iconic sensitivity disrupted? Is iconicity more ‘broken’ in some people than in others, and what can we learn from individual differences? If we want to understand the linguistic mechanisms and cognitive processes involved in lexical iconicity, breaking iconicity is as important methodologically as making it.

When preparing this lecture, I noticed my own destructive streak: a lot of recent work by me and collaborators can be construed as focusing not just on making, but also breaking iconicity to understand underlying processes and mechanisms. A selection (bibliographic details and more papers here):

Here’s the abstract for the keynote lecture I’ll be giving at the 11th Symposium on Iconicity in Language and Literature in Brighton, April 6-8, 2017 (site).

The notion of iconicity has seen a remarkable increase in prominence in recent years. No longer the marginal phenomenon it once was, it has become a canvas upon which we paint our wildest dreams about lexical structure, language learning, and the evolution of communication. Amid the flurry of exciting work it is sometimes hard to see what exactly iconicity is. Some divide it into subtypes, treating it as a semiotic relationship that comes in kinds. Others measure it by graded judgements, treating it as a substance that comes in degrees. Yet others use it as a predictor variable in experimental work, treating it as a property that can be present or absent. These diverse operationalizations point to a need for clarity about the empirical foundations of iconicity. Here I approach this goal from the perspective of research on ideophones, vivid sensory words found in many of the world’s spoken languages. Studies of ideophones have it all: daring claims of pervasive iconicity down to the level of speech sounds, counterarguments positing the utter irrelevance of anything iconic, and a variety of approaches trying to chart a middle way between these extremes. I report on a series of linguistic and experimental investigations of iconicity in ideophones. Starting from the use of ideophones in conversation —the primordial ecology of language and verbal art— I show that they are best understood as multimodal depictions: communicative acts that invite us to imagine what it is like to perceive the scene depicted. This basic fact helps explain a range of cross-linguistic observations about ideophones: from their marked forms to their special morphosyntax, and from their sensory semantics to their uses as direct appeals to experience. Careful psycholinguistic experimentation allows us to see how phonemes and prosody can come to function as iconic cues, why iconic ideophones are easier to learn than arbitrary adjectives, and how the cross-modal associations they thrive on may be related to synaesthesia. Ideophones challenge us to take a fresh look at language and consider how it is that our communication system combines multiple modes of representation.

Some relevant readings (a larger selection of papers is here):

Ideophones —vivid sensory words found in many of the world’s languages— are often described as having little or no morphosyntax. That simple statement conceals an interesting puzzle. It is not often that we can define a word class across languages in terms of its syntax (or lack thereof). After all, most major types of word classes show intriguing patterns of cross-linguistic variation. There is no particular reason to expect that the morphosyntactic position or degree of embedding of, say, noun-like or verb-like words will be similar across unrelated languages. Indeed that is why typologists define comparative concepts primarily by reference to semantic rather than grammatical or morphosyntactic properties (Croft 2003; Haspelmath 2007).  END_OF_DOCUMENT_TOKEN_TO_BE_REPLACED

I provide a quick summary in 2×3 points below. For a write-up that’s much more fun and has great illustrations, check out Gwilym Lockwood’s Sound symbolism boosts novel word learning: the MS Paint version. END_OF_DOCUMENT_TOKEN_TO_BE_REPLACED 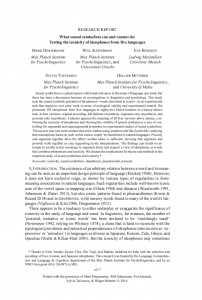 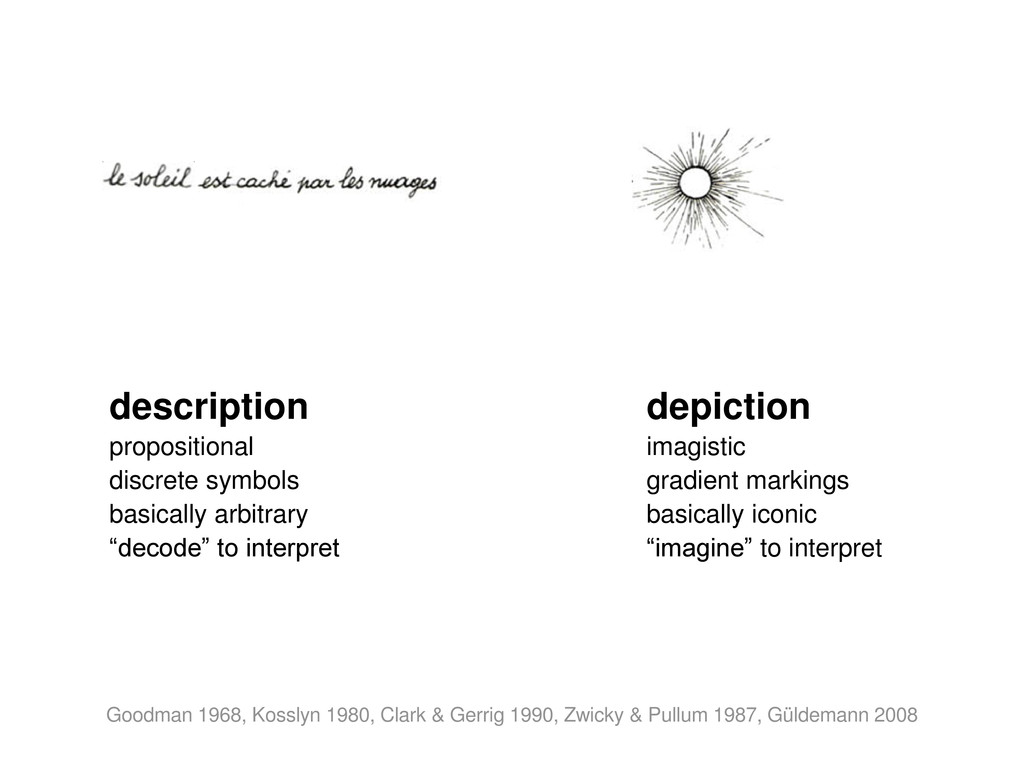 The review doesn’t say much about the morphosyntactic typology of ideophones because there will be another publication coming out on precisely that topic (‘Expressiveness and system integration‘, in STUF – Language Typology and Universals); and it doesn’t say much about ideophones and gesture because there is a chapter on that in my thesis (as well as forthcoming publications). 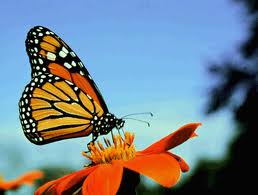 Ideophones, like so many things in life, are easy to identify but hard to define. Many researchers have grumbled about the shortcomings of Doke’s descriptive characterization of ideophones (see discussion here), but few have attempted to formulate an alternative. For better or worse, I did,1 but it took me a few iterations to arrive at something that I felt worked well enough to be useful in cross-linguistic research. One of these iterations featured the word “vivid”, but I’ve since dropped it. Why? END_OF_DOCUMENT_TOKEN_TO_BE_REPLACED

Just out: a new issue of SemiotiX, the e-journal on all things semiotic edited by prof. Paul Bouissac. Among other things, it features a guest column by yours truly.

Ever felt sceptical about the supposed iconicity of ideophones like Siwu kananaa ‘silent’ or Japanese iya iya ‘with a heavy heart’? Isn’t it similar to the cute, but mistaken story that all Chinese characters are like little pictograms? And what have these two things got to do with the paintings of Van Gogh, Duchamp, and Mondriaan? Read all about it.

Update: SemiotiX issue XN-8 features a revised and expanded version of this essay.

The linguistic blogosphere featured some posts recently on the topic of phonosymbolism, phonosemantics, and Chinese characters. It started with a post by Victor Mair over at Language Log, outlining several approaches to “etymologizing” Chinese characters. A follow-up by David Branner highlighted some of the problems with simplistic notions of phonosymbolism. Here I add some texture to the conversation by discussing the views of Ezra Pound, making a comparison to form-meaning mappings in ideophones, and introducing the notion of coerced iconicity. END_OF_DOCUMENT_TOKEN_TO_BE_REPLACED